The Quiet Dream of A Normal Life: Hisham JamJoum

As part of a series of interviews, we will hear from Palestinians and Israelis who speak of the current situation in Israel/Palestine, and they're hopes and dreams for a normal life beyond occupation. Today we speak with Hisham JamJoum, a Palestinian non-violent peace activist working with The International Solidarity Movement. 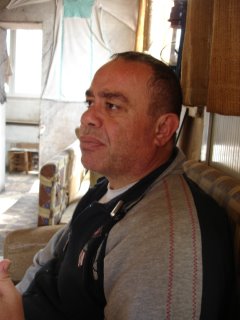 HISHAM JAMJOUM:The situation in general is very bad. Whether we speak of political situation, economic situation, or cultural situation. Now it's very bad now. We don't know where we are now. We have no government. No Palestinian government. And in a few days, there will be elections for the new Israeli government.

We don't know what they will do. And, until now, we are waiting for the program of our government, The Palestinian National Authority. So till now we see how we are living and we hope that we get good things in the future. But, you know, we must wait. This word we must use it a lot; Wait. We'll wait and we'll see what will happen.

I was born here in Jerusalem in 1959. I grew up, and when I start to understand what is happening around me, it was during the 1967 war. I remember when I saw for the first time a soldier in my life in front of me when he came and check us, we were living in Beit Hanina. He came to search our house and he says he is Jewish. I didn't know what Jewish was. But he says he is Jewish.

After they came, there was two days of curfew and a lot of shooting outside of our house. But after that...I think it was some sort of program, political things. They let the people, the people at that time, they gave them a lot of money, a lot of jobs, and a high salaries. I'm not sure if it was a program or what, but they did this up until the end of the 1980's. And then after this, they told us; "You can't go and work inside Israel anymore." Those from the West Bank, I mean. Before, any Palestinians could come and work in Israel and sell produce and other things. But now, they say we can't do this anymore.

So in this, they kept us for 20 years working and having a good income they cut it off all at once. People use to make good incomes, you know. I can see now, I know a lot of people they see on TV or on the maps they know they can't go to Israel.

And the worse thing I can think of right now that makes the economic situation bad is they increase the taxes. They increase them for buildings and for commercial things, and there is no work to pay the taxes.

That's why the situation becomes worse and worse. People are hoping for a richer future. But also, at the same time we say; "Wait."
Posted by Christopher Brown at 8:45 AM