Where are we now? Where do we go? An interview with Lina Mustaklem 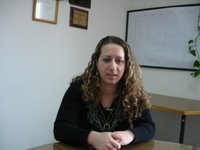 I received the chance to speak with Lina Mustaklem, who works for Al Haq. The first Palestinian human rights group in The West Bank. We spoke of the Hamas election, the Jericho prison incursion and what the future might hold for the Palestinians.

Chris: Since the invasion of the Jericho prison, how do you foresee the situation in Palestine?

Lina Mustaklem: Well what happened in Jericho, I think it is like a kidnapping. It's not a legal thing to do by the Israeli occupation. The American and British observers who were there, left 20 minutes before without...All the agreements...They just left. And they kidnapped Ahmed Sadat. Now Ahmad Sadat is not answering any questions because he thinks this was illegal. So, he is not saying anything in custody.

So now with Hamas and everything is getting worse. More harassment by the soldiers, by the settlers. In Hebron it's getting worse all the checkpoints. Finding it very difficult to pass. The West Bank is becoming difficult to travel anywhere, its becoming more difficult than before. The Wall also, people are becoming...If my work is here and I live here, I can't go to another place and work. The area that we are living in is becoming smaller. Even in Gaza, even though they withdraw from Gaza this is not true. They are controlling the borders, they are controlling the air, the sea. People can't bring the goods to Gaza. There is no bread. Vegetables are not coming in. So, you know in all stages it is becoming more difficult.

Chris: You mean they are starving the people of necessities of life?

Chris: Do you think that the Israeli government will starve them to the point that they think only about things for daily life and somehow forget about the larger picture of justice and a State?

Lina: Yeah, they always do that. Before they use to have the checkpoints in some villages. Now before they finished the wall, they removed some of these checkpoints. And the people say; "Oh that is better. We can move now between these villages. But they forget about the wall. They forgot about their lands. All the water and everything. So, they just say now; "I can move from this place to this place without a checkpoint. So, our demands are getting less because of this starvation. This desperation.

Chris: Why do you think Hamas won the election?

Chris: Do you think if Hamas recognizes Israel's right to exist. Do you think that the Israelis will sit and negotiate with Hamas?

Lina: It seems that Israel only wants the Palestinians to work on all they're things, and they do all the work. I don't think that Israel will never agree to negotiate with Hamas. So, I think we will never have peace.

With Hamas in power, we are unsure of what the Israelis will do. But now after the kidnapping in Jericho, this was like a propaganda by Israel. One of the things that Olmert (Acting Prime Minister Elehud Olmert) wants to do.

Chris: I've read that in 2010 Olmert is saying that a final border will be done without the consultation of the Palestinian people.

Lina: Well, if you see the checkpoints. You passed the Qalandiya checkpoint and now they don't want to call it a checkpoint. They want to call it a terminal. And if you see Bethlehem checkpoint, you can see now that they are separating places trying to keep Palestinians in one area and the Israelis in one area. There will be no sharing with the lands. So, I think they are working on that. By 2010, we will have our small areas. And this is what Israel wanted to do a long time before. And all these new things we see now, they were preparing it a long time ago, but we see that they are just building it now.

Chris: After the wall is complete and the "Cantons" that Israel are erecting have been finished, and you now have a so called State, do you think that Israel will let you control your own destiny?

Lina: Oh of course they will still control all these things. We don't believe that Israel will give us our full control of everything. Because its not in Israel's benefit to do so. Like controlling our own water and this is a vital thing.

Chris: Water is always a concern here in The Middle East, in particular Israel/Palestine. With the mild winter here in the region, do you think that the water shortage will be even worse for the Palestinians than before?

Lina:Yes this is happening. And last year we, my family, we didn't have water for two days. I say at my home, my mother use to wash clothes and all the washing of the house on Monday. On that day, we had water, Monday and Tuesday. Then they changed it and made it Sunday and Monday. Every time they keep changing the days but it is only for two days we had water. And the other days we had to fill the tanks so we have water for the end of the week, so we can shower, and wash with it.

Even though the water is not so clear and its not healthy to drink it we have to bring home mineral water to drink and this is expensive. But if you go to the Israeli side they can drink from the tap. Settlers they have all the water they need. They water the plants. They have water in their swimming pools. But in Palestine you can't do that.

Chris: What do you see for the future of Palestine?

Lina:Well you are asking me this question. In front of my house the annexation wall is built. It is just two meters from my home and it's going to hide my neighbor. I was playing with them when I was five years old. Now more than twenty years now we are neighbors and the wall prevents me from seeing my neighbors. And you know Palestinian society has strong bonds, family, friends and the like. I feel like they are my family.

Note: If you like to know more information about the work of Al Haq in Palestine please click here.
Posted by Christopher Brown at 6:50 AM