Open Letter to Prime Minister Olmert....Yes another one! 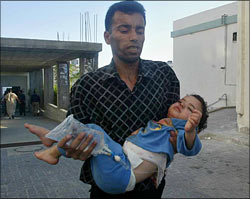 Hi. It’s been awhile since I last wrote to you. Sorry about that, been busy writing about some pretty bad things going on in Gaza. Actually, that’s what I wanted to talk to you about.

I know the army is showing a lot of restraint in the Gaza Strip, but there are a few things that have me concerned at the moment.

In the last nine days 14 Palestinian civilians have been killed as a result of Israeli airstrikes that hit their targets and killed innocents nearby or missed their targets completely.

I appreciate you expressing “deep regret” for the killings due to army operations. But then you went on to say that the lives that are threatened by Qassam attacks are “even more important.”

Well, at least you’re finally starting to state truthfully what you’ve thought about in your mind; that Palestinians lives don’t amount too much.

Then you went on to say that; “I am deeply sorry for the residents of Gaza, but the lives, security and well-being of the residents of Siderot is even more important. I reject the attacks on the IDF and its commanders. No one is more dedicated or more cautious, and will continue to be so in the future.”

Well, I’m glad to hear that Mr. Olmert, because the last nine days have not been the army’s best.

I’m just assuming that the missile strike on the house which killed Fatima Ahmed, 37, and her brother Zakaria, 45, was one of those cautious and dedicated operations the IDF is so noted for.

Oh, did I fail to mention that Fatima was seven months pregnant?

But not to worry, we can all look to you as being a reasonable man. Well, reasonable is a relative term here. I mean, when you look at the comments that people like Bebe Netanyahu are making:

“The IDF has the power to wipe out an entire population if we wanted. We could wipe out all of Gaza but we are not doing this.”

Wow Mr. Olmert you sound like your prepping for the Nobel Peace Prize. Of course, Israel would never do this sort of thing. Remember, it has “the most moral army in the World.” Wow, glad we got that sorted out. I was starting to wonder; you know, what with children being blown apart and all recently.

Good on you buddy!

I’m glad the whole of the government doesn’t have the mindset like Yuval Steinitz, the former chairman of the parliamentary foreign affairs and defense committee, said the Palestinians have failed to prevent daily attacks by homemade rockets and Israel must take steps to protect itself.

“I call on the government of Israel to wait no further, but to launch a comprehensive ground operation in Gaza for several weeks, to strike at the very foundations of the terrorist infrastructure,” he said. (Weizman, Steve AP Press 23 June 2006)

Man, I’m glad you guys aren’t listening to this dude. Can you imagine what Gaza would look like if ground troops went in? Seems better just to stick to the airstrikes, seems to be working for ya. Sure you kill an innocent kid here, bomb the house of a large family there. The point is, your making progress. And we sure know that the Outside world isn’t going to say anything. Well, almost no one; I heard that UN Secretary General Kofi Annan is getting a bit perturbed about the response that you all seem to have in response to defending yourselves. But don't worry about him, the UN is gutless in the face of such fierce countries as Isarel, The U.S., and The Marshall Islands.

Look, I know you’ve got a lot of people to protect Mr. Olmert, Israel isn’t large, but hey six million is six million. But don’t you think that Annan’s comments that Israel’s strikes need to be, “proportionate and do not put civilians at grave risk,” doesn’t that seem valid to you? Almost three times as many Palestinian civilians have been killed in Gaza alone in the past nine days as Israeli civilians in Sderot killed by Qassam rockets in the past five years.

But hey, if your determined to go on with this airstrike thing, knock yourself out. I admire a person who sticks to this/her principles. Who cares if the World community has some serious questions regarding the deaths of the Ghalil family on Bait Lahiya beach back on 9 June. Your men investigated it and found themselves not guilty of foul play. I use to think that there needed to be an outside inquiry on this but not anymore!

The moral army needs no outside interference dammit!

Well, I better let you go. You’re a busy man and probably have better things to do with your time like have that wonderful photo op with Mahmoud Abbas in Jordan, and talking about you know circumventing the Hamas led government and talking to a man who was basically put in the “Prime Minister” position of the PA back in 2003 by you’re predecessor, Ariel Sharon and his lackey George Bush. Good luck with the talks, and remember to smile for the cameras.

PS Oh I almost forgot, any chance that you might re-consider talking with the Palestinians about the 1967 borders? I know you said; “I have no commitment to return back to the boundaries which are defined by my colleague Abu Mazen or by other Palestinians,” but could you give it some thought?

Any chance that you could speak to Bush and the EU about lifting those sanctions on monies being given to the Hamas led government? I’ll tell you, I’ve got friends who have small children and when they get sick, their parents can’t take them to the hospital because they’ve run out of medicine. It’s really bad right now. Any help you can give would be great! Thanks a lot pal.
Posted by Christopher Brown at 12:51 PM