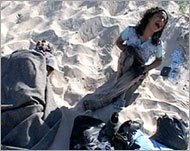 I wonder what the children’s parents, Ali and Raisa, were doing; sitting on a blanket having a simple meal of Arabic salad with Falafel, bread and cheese; talking to each other:

“It’s nice to have this time together. For this brief moment in time, I feel alive and happy.”?

Do you think that youngest child, whose body was vaporized by an Israeli artillery shells, which was manufactured by a US defense contractor, do you think he looked out upon the vast ocean and marveled at the horizon before him? Do you think he imagined that the sea that lay before his gaze, the very sea that now runs red with his blood, resembled tin foil that sparkles as the Sun shone down upon it?

I wonder if the little girl sat down and thought:

“Some day, I’m going to learn to swim and frolic with the dolphins.”

Do you think she thought about that?

What did the Israeli gunboat commander think about as he proceeded to fire his artillery shells upon this family and the four others?

Do you think he believed that just before he ended seven lives that all of them were terrorists?

How can one sleep after the truth comes out about such a horrible thing?

How can Israel act so cold and repeat the standard refrain:

“We regret any harm caused to innocent civilians.”

Do they think we believe they are sincere?

What of the wounded?

Even if they are recovering in Israeli hospitals, does this wipe away the nightmares, flashbacks, post-traumatic stress, and loss of life that they will forever feel?

What of the World?

Why do we remain silent?

Why do we not care about our Palestinian brothers and sisters?

Why are so many so afraid to call the actions of the Israeli government against the Palestinian people, “A crime against humanity”?

Is it that we don’t consider the Palestinians human and thus, there is no crime against an inhuman population?

I wonder?
Posted by Christopher Brown at 12:35 PM

Palestinian Authority TV has been repeatedly broadcasting a falsified video clip of the events surrounding the deaths of seven family members on the
Gaza beach on Friday. In an attempt to blame Israel's navy for the deaths, PA TV took unrelated video of an Israeli missile boat firing at Gaza earlier
in the day and edited them into the scenes, creating the impression Israeli responsibility.

The following is the time frame of the PA TV editing and falsification:

00 - :32 Seconds: PATV clip introduces the scene by showing an Israeli missile boat firing on the Gaza coast. Audio of ambulance siren is added to
visual to create false impression that boat was shooting at same time as
ambulances were present.

0:32 - 1:05: Scene switches directly to the victims, creating a false
connection between the events.

1:05 - 1:09: PA TV returns to the naval vessel showing sailor with
binoculars looking at shore, again creating the false impression he is
observing the evacuation.

1:09 - 2:00: The evacuation scene continues ending with the word "Why" on
the screen only in English, indicating a foreign target audience, possibly
media.

The video of the Israeli navy was unrelated to the deaths, having been
filmed earlier in the day and had already released to the media and to the
internet by the Israeli army at 4:00 PM, an hour prior to the deaths.

Click here to see the falsified PA TV broadcast of the evacuation
www.pmw.org.il/asx/PMW_Shooting2006.asx

Comment: It should be noted that not only is the video falsified, but the
beach scene clearly backs the Israeli contention that the deaths were not
caused by an Israeli shell. Any Israeli shell would have left a giant crater
and spread sand over the entire area, as well as on the victims. There is no
crater and the beach scene is not disturbed in a way that indicates an
Israeli shell could have landed nearby.

Seems a palestinian mine is the likely suspect. It appears that the Palestinians have, again, martyred their own and blamed Israelis.