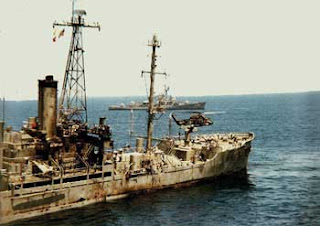 This week on Crossing The Line, June 2007 marked 40 years of Israeli occupation of Palestinian land, this much is known. What has gone widely unreported is another 40 year anniversary. one in which American soldiers were killed. No we're not talking about the war in Vietnam. This attack was carried out by one of America's closest allies, Israel.

Today we'll talk to a survivor of the USS Liberty, a ship that was nearly dystroyed by the Israeli army in an unprovoked attack that left 34 US navy personal dead.

Then later in the podcast our weekly commentary by Mumia abu-Jamal and The War's Toll compiled and read by Scott Burgwin of The Stand Independent News Service.
Posted by Christopher Brown at 12:04 AM

What is the typical response to your posts? Just curious seeing that you've been blogging on this pretty serious topic for a while now.