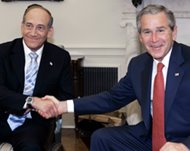 On May 9th, The House of Representatives voted for H.R. 4681. Which would place severe sanctions on the Hamas led Palestinian Authority until it recognizes Israel and denounces terrorism. The House was expected to vote on the bill Tuesday the day Prime Minister Ehud Olmert makes is first visit to Washington D.C. AIPAC was instrumental in getting congress people to sign on to the bill.

H.R. 4681 sanctions would include:
1. Cutting off nearly all aid to the Palestinians.
2. Stopping payment to the United Nations to the amount of aid given to the Palestinians.
3. Limit travel of Palestinian officials.
4. Designate certain portions of Gaza and the West Bank as “Terrorist Sanctuaries.”
5. Prohibit International businesses from doing business in these territories.
6. And shut off all diplomatic ties.

Of course nowhere in the World could you get such a one-sided piece of legislation that doesn’t address the problem at all which is the problem of the occupation and freedom for the Palestinian people, but that is for another time.

But there is some good news in all of this.

Although the bill passed out of the House overwhelmingly by 324 votes, the mere fact that 37 Congress people spoke up and said “Nay” to collective punishment is noteworthy. In fact, six of those who voted “Nay” are Republicans.

What is this saying?

Well, it says a lot when you realize that there are politicians that really are trying to not give the Israeli lobby and Israel a blank check to inflict more pain and suffering on the Palestinian people for the actions of the few few.

It means that these 37 men and women are standing up and saying: “Not in our name!”

Because these brave men and women decided to honestly vote their conscience rather than their bank balance.

Below are the names of the very Congress people who voted “Nay” on H.R. 4681.

Diogenes, a philosopher who was chief among the school known as the Cynics, would walk around his city in a hollowed out barrel, holding a lantern, looking for an honest person.