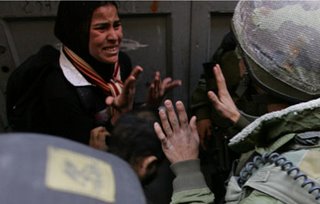 Nothing surprises me anymore in this “so-called” Holy Land.

According to a recent survey conducted by the Israel Democracy Institute 62 percent of Israelis support government-backed Arab emigration.

29 percent of Israelis think a Jewish majority should decide crucial decisions concerning Israel’s future, and only 14 percent feel that relations between Jews and Arabs are stable.

58 percent disapprove refusal of orders in the military, as opposed to 70 percent last year.

I’d like to think that this surprises me but again, it does not.

You see at this stage in my life, nothing really surprises me. No, I’m serious. Israel/Palestine has been my home for over four years and believe me; it takes a lot to surprise me now.

For instance, when the Israeli Occupation Forces (IOF) fires over 300 shells towards targets in the Northern Gaza Strip on Monday.

When Palestinian Prime Minister Ismail Haniyeh, warned on Monday that cut off from most foreign aid since his Hamas movement took office five weeks ago, could founder unless new money arrives. And further stated: “If the siege continues, the whole authority will be facing collapse…and if there is a collapse, there will be chaos in the region.”

This also doesn’t surprise me.

When Israeli Arabs are the only ones who are able to give money to West Bank ID holders, because of the financial restraints placed on the PA.

When I hear of sanctions that have been imposed on the PA by Israel, the US, and the EU are directly threatening to harm a medical charity program for Palestinian children; not even that is going to surprise me.

You see one thing I can count on from the Israeli government is consistency. How you say? Well, they’ve kept up the occupation for almost 40 years. They continue with collective punishment for an entire population when a small percentage of the population tries to harm Israeli civilians. They are masters of spin and have done an excellent job of showing how long suffering Israel has been throughout this conflict; and have deflected a high majority of criticism as anti-Semitic.

Uncle Leo are you listening?

When people who read this blog send me lovely emails saying I’m anti-Semitic, un-informed, and misled by radical self-hating Jews, and a fucking nigger bastard who needs to be lynched (by the way is that the best you can do?), I just smile and remind myself of what a journalist friend once told me when I first got into this business: “If your not pissing someone off, then your not doing your job.”

But you know what, I just thought of something. Wouldn’t it be a kick in the head if these same people who write me the emails, finally went and saw the conditions that my Palestinian brothers and sisters live with on a daily basis; and then came back and said; “How can we make this better? How can we find peace amongst Israelis and Palestinians, real peace the kind where justice reigns supreme?”

Now that would surprise me.

Photo by: Nayef Hashlamoun
Posted by Christopher Brown at 1:15 PM