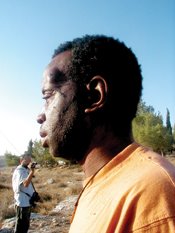 Note: On 29 September 2004, settlers near Havot Maon attacked myself and a colleague of mine. The reason for the attack was for accompanying five Palestinian children to school. My colleague, Kim Lamberty sustained a broken arm, and badly damaged knee. The attackers punctured my lung, beat me with a baseball bat, threw large stones at my head which, as you can see by the photo on the left, gave me a sizeable lump on the left side of my head.

Jewish settlers from the Havat Maon settlement located
south of Hebron hurled stones at Palestinian children
twice on Saturday - once when the children were walking to
school and once as they made their way home.

The children, long-time and frequent targets of settler
attacks, were being escorted by Israel Defense Forces
soldiers when they came under attack.

Two IDF soldiers and four Palestinian children were
lightly injured in the clash.

IDF soldiers fired warning shots in the air in an effort
to prevent the settlers' attacks. The IDF said the
assailants fled to a nearby area of brush and police
forces were searching for them.

Some 50 left-wing activists were attempting to move from
the village of Khirbet Al-Tawani, where the school is
located, to the children's home village of Umm-Tuba.
However, they said the IDF was preventing them from doing
so after the area was declared a closed military zone.

An agreement was subsequently reached according to which
an IDF medic would enter Umm-Tuba to examine the children
said to have been hurt in the settlers' attacks.

The Maon settlers last week renewed their routine
harassment of children from the Palestinian village of
Khirbet Al-Tawani.

The IDF and police routinely provide a jeep in order to
provide the Palestinian children protection from the
settlers as they make their way to school.

Meanwhile, two police officers were lightly wounded Friday
during confrontations with settlers in the Beit Shapira
area of Hebron.

Settlers pelted policemen with eggs and officers have thus
far arrested two settler youths in connection with the
riot in the West Bank city.

One of the wounded officers absorbed a blow to the head
from a bottle of paint thrown by one of the demonstrators.
The other policeman was hit in the eye by an egg which was
flung in his direction.

Security forces have until Monday to remove three settler
families from the Palestinian home in Hebron that they
have been illegally occupying for a month, the High Court
of Justice ruled on Friday.

Dozens of settler youths broke into and were holing up in
the Al-Nazar family home on Friday afternoon, Israel Radio
reported. The Israel Defense Forces announced the area a
closed military zone and deployed troops to prevent more
youths from entering the area.

The court ruled that the settlers can be removed forcibly
if necessary.

IDF troops were preventing non-residents from entering the
area in an effort to minimize clashes.

Orit Struck, a representative of the Hebron Jewish
community, told Israel Radio she doesn't think the
settlers will leave of their own volition.

"I assume that we won't leave voluntarily," she said.

On Thursday night the High Court gave the families until
11 A.M. Friday to leave of their own accord, saying that
if they refuse to abide by the court ruling, they will be
evicted by security forces.

However, the prosecution asked the court to postpone the
evacuation, apparently due to a request from IDF
officials.

Police and IDF officials were concerned that the eviction
would not be completed by sundown Friday, when the Sabbath
begins. It is expected to take a long time because the
forces have been ordered to carry out the evacuation
cautiously because of the dilapidated condition of the
house and the narrow stairs. They will also apparently not
be able to use cranes.

Security forces began deploying in and around Hebron on
Thursday morning in preparation for the forcible eviction
of settlers from the building.

The eviction, which was approved a month ago by the
defense minister, was delayed while the High Court
considered a petition against the eviction order submitted
by the Jewish community of Hebron. The eviction order was
based on claims that the lease was based on identity fraud
carried out by a Palestinian falsely claiming to be the
home's owner.

More than 1,000 soldiers and police officers will take
part in any evacuation operation. They have explicit
instructions to use great care in removing the occupants
and their belongings from the apartments.

The Jewish settlers in Hebron, who petitioned the High
Court against the eviction, was expected to convene
Thursday night to decide whether to honor the court's
ruling, to resist the evacuation, or to put up passive
resistance only.

Attorney Michael Corinaldi, the settlers' lawyer, said
that once a lower court rules on the legality of the
documents and the contract involved in the families'
occupancy of the Palestinian home, they will be permitted
to return.

The community claimed earlier that the fact that the state
was forced to rely on "false data and political arguments
such as 'the explosive situation in Hebron' and 'fear of a
conflagration due to the expansion of the Jewish
settlement' proves like the testimony of a thousand
witnesses that the basis for the eviction is political."

Two of the three families living in the home, known as
Beit Shapira, are the Schlissels and the Grabowskis, both
of which lived in Hebron's wholesale market (the Shalhevet
neighborhood) until leaving voluntarily a few months ago
as part of an agreement with authorities.

Tzippi Schlissel is the daughter of Rabbi Shlomo Ra'anan,
who was murdered seven years ago in Tel Rumeida, also in
Hebron.

"We don't know how we'll react to another expulsion, and
we hope prayer will bring about the redemption soon,"
Tzippi's husband, Yisrael Schlissel, said.

The three families forced their way into the Al-Nazar
family home near the Avraham Avinu neighborhood on April
6.
Posted by Christopher Brown at 1:43 PM