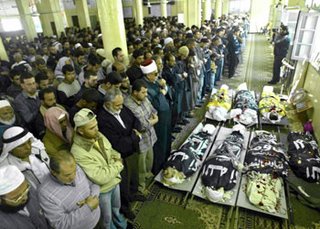 Suppose I were to leave my office here in Chicago and walk
the short distance to the kidney dialysis unit down the
road and pull out the tubes to which four elderly patients
were attached, making them seriously ill or killing them.
Suppose I said I did this because I disagreed with the
Bush Administration's invasion and occupation of Iraq, its
use of torture, and its countless other profoundly
undemocractic and illegal policies. What would that make
me? A murderer for sure, a monster and a new vicious kind
of terrorist. Such an action would be unconscionable in
any moral system.

And yet this is what the so-called "international
community," a few powerful governments, feel entitled to
do to Palestinians because those governments disagree with
the policies of the elected Hamas authority. Ha'aretz
reported on May 9 that "At least four people suffering
from kidney diseases died in the Gaza Strip in April,
after the cash-strapped Palestinian Authority Health
Ministry cut the Shifa Hospital's budget for the necessary
dialysis treatments." The Palestinian Authority is near to
collapse due to a decision by the European Union, the
largest donor to Palestinians under occupation, to cutoff
vital aid. At the same time, the United States has moved
aggressively to threaten anyone who tries to render
assistance to suffering Palestinians, scaring banks from
allowing cash transfers to the Palestinian Authority.

According to Dr. Juma al-Saka, 300 of Gaza's 650 kidney
patients are treated at al-Shifa hospital in Gaza, and due
to the sanctions, their treatments were cut from a
required three per week to just two. Four have already
died, others are sure to follow unless the EU-US sanctions
against the Palestinian people end.

Ha'aretz adds that, "Kidney ailments are not the only
diseases going untreated, according to the doctor, who
said that some cancer patients have stopped receiving
chemotherapy and other vital drugs due to money and
equipment shortages."

All of this is a flashback to the years after the 1991
Iraq war, when international sanctions killed hundreds of
thousands of Iraqis, starting with the oldest, the
youngest and the sickest. In US Secretary of State
Madeleine Albright's immortal words, this holocaust was
"worth it" if it helped the US achieve its policy
objectives. I naively thought the lesson had been learned.
Now the Palestinians are to have their turn.

Meanwhile, Israel continues to build a comprehensive
system of apartheid, to kill Palestinian civilians and to
steal their land with total impunity. On Saturday, May 6,
65-year-old Mousa Salim Mousa al-Sawarka, was killed by
shrapnel to the head, when Israel shelled the area in the
northern Gaza Strip where he was grazing his animals. The
next morning, Hassan Hussein Khader al-Shaf'ei, 55, was
killed by shrapnel throughout the body, while he was
farming his land near the same area, and a woman, Fatima
Mohammed Sahweel, 59, was wounded with shrapnel to right
the eye. Israeli prime minister Ehud Olmert announced
("Olmert: Settler blocs to be part of Israel forever,"
Ha'aretz, May 4, 2006). Within Israeli society, the
dehumanization of Palestinians continues to advance: a new
poll by the Israel Democracy Institute found that 62
percent of Israelis support "government-backed Arab
emigration" -- in other words ethnic cleansing of
Palestinians. ("More than half of Israelis want gov't to
help Arabs emigrate," Ha'aretz, 9 May 2006)

As Israel's onslaught goes unchallenged by the US, the UN
leadership, European and Arab governments, it is
encouraging to see that the UK's largest university and
college lecturers union, the National Association of
Teachers in Further and Higher Education (NATFHE), is
about to vote again on a resolution to recommend that its
67,000 members boycott Israeli lecturers and academic
institutions that do not publicly declare their opposition
to Israeli policy in the occupied territories. (Ha'aretz,
May 9).

Ronnie Fraser, a NAFTHE delegate who heads a group called
Academic Friends of Israel, objected that "Academic work
should not be blocked on political grounds." The UK
Ambassador to Israel, Simon McDonald, reacted to the
boycott plan saying, "we do not believe that such academic
boycotts are productive - far more can be obtained through
dialogue and academic cooperation." Would that the British
government was so willing to defend Palestinians' rights
as it is to protect the privileges of Israelis. It seems
that Israeli professors should never be deprived of their
ability to enjoy conferences in Oslo, London or Florence
no matter how bad things get in Palestine, no matter how
imprisoned Palestinians are in their ghettos and no matter
how complicit major Israeli institutions are with the
apartheid system.

The EU is now trying to deflect criticism by putting
together a plan to channel aid to the Palestinians without
going through Hamas. Desperate for any relief, many
Palestinians have welcomed this, though the aid seems a
long way from flowing as the EU has no idea how to achieve
it. This palliative is merely another example of the EU
stepping in to subsidize the occupation and mitigate its
most pernicious effects so as to avoid actually having to
do the hard work of confronting Israel and rolling back
its colonialism.

Ali Abunimah is co-founder of The Electronic Intifada
Posted by Christopher Brown at 2:06 PM

Seems to be a fair trade.