The High Court of Justice on Sunday May 14th narrowly upheld a controversial law that effectively bars some West Bank Palestinians from living with spouses and children in Israel.

I read this and thought back to a film I shot in South Africa in 1994 called MINER. The film revolved around a South African mine worker who, because of the Group Areas Act, was required to live and work in Johannesburg while his wife and young son lived in the Cape Province more than 600 miles away.

Once a year this man was able to go home and see his family. That time is Christmas. The film revolved around the three days that he spent with his family. There wasn’t much dialogue in the film, there didn’t need to be. You see, the mere fact that this man could only see his family once a year was more than any words could say.

By the way, did I mention that the man was Zulu and his wife was Xhosa?

Well it does. You see, the Group Areas Act made it unlawful for a Zulu and a Xhosa to live in the same area. Oh sure, folks did it, but when you were caught doing it, the punishment was severe; men arrested, children separated from their parents, homes demolished, land (if they have any) confiscated. I know all about this because I watched my own family members endure it.

Reading about the Israeli High Court’s decision brings back these memories all over again. The mere thought of a family being torn apart simply because one spouse has a Jerusalem ID and another a West Bank ID is truly despicable. 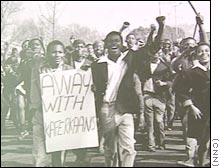 Not so for the husband if he is a West Banker and his wife holds a Jerusalem ID. At the rate things are going now in Palestine, short of learning how to become invisible and/or conquering how to fly without use of wings or an airplane, even one week is out of the year is going to be a stretch.

Folks can hem and haw all they want that Israel is not like South Africa was during the apartheid era. And you know something, they’d be right.

There is no law that bars anyone from living with anyone. If an Israeli citizen wants to live with a Palestinian who is not a citizen of Israel, that person is free to leave Israel and live with their palestinian spouse anywhere else in the world.

The world not big enough for you?

As for getting off the street. That was a law written by Arab Muslims. Or have you forgotten the past?