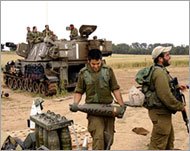 If Avigdor Lieberman didn't exist, then Ehud Olmert, Amir Peretz and an entire battalion of politicians would have had to make him up. Lieberman's big mouth gives them pearls of wisdom. He emits a bunch of nonsense regarding Arab Knesset members, flavors his comments with a bit of Holocaust, everyone seriously condemns him and continues to screw the Arabs.

When the leader of a midsize party equates Israeli public figures to Nazis, who pays attention to the fact that at precisely the same time, yet another government in Israel is being established in which a fifth of the state's citizens are not represented? At the festive occasion of the swearing-in of the new government, the sole non-Jewish representative of the ruling party, a Druze, took leave of his title of deputy minister.

It's so good that Lieberman chattered about the Nuremberg trials. It distracts attention from the resemblance between his own party platform and the Nuremberg laws and Nazi party platform, whereby only members of the German nation who proved through their behavior that they were ready and fit to loyally serve the German nation and the Reich could be citizens of the state. Therefore, the Nazis decreed, no Jew could be a citizen of the Reich.

The platform of Yisrael Beiteinu, which was and could again become a candidate for membership in the cabinet, calls for conditioning the granting of citizenship on loyalty oaths to the state and military or national service and for placing Arab citizens, along with their homes, under foreign sovereignty.

More than 40,000 Israelis voted for the Jewish National Front party headed by Baruch Marzel, which states that "the Holy Land is the seat of the Jewish people only" and demands "applying in practical terms the commandment 'and you shall dispossess them and you shall expel them.'"

The Central Elections Committee, led by the next president of the Supreme Court, did not even disqualify the Herut party, headed by Michael Kleiner - a party that promises to demand that Arab citizens sign a declaration that Israel is a "Jewish state" and to pass a law to encourage their immigration to Arab countries. A survey conducted by the Geocartography Institute and published recently by the Center Against Racism and Defamation shows that the Israeli public is ready for a blue-and-white Jean-Marie Le Pen; every second Israeli Jew is not prepared to have an Arab visit his house, and 40 percent support encouraging Arabs to move out of Israel.

The "shock" of Lieberman-style provocations allows the Jewish establishment - both right and left - to wash its hands of the matter and avoid dealing with the chronic discrimination suffered by 20 percent of the population. According to Sikkuy, the association for the advancement of civic equality in Israel, an Arab student in elementary school gets 1.51 hours of study a week from the state, compared to the 1.87 hours that his Jewish neighbor gets. In Arab cities there is an average of one professional health clinic for every 29,500 people, compared to one clinic for every 15,500 people in Jewish cities.

Two and a half years ago, the Or Commission, which investigated the events of October 2000, determined that "it is a state interest to remove the stain of discrimination." But not only has that stain barely faded; no one has yet been tried for killing the 13 victims in the 2000 riots, or for the deaths of 15 additional Arab citizens who have been killed by police fire since then.

And after all that, the Jewish rulers expect Knesset members belonging to Arab parties to support the unilateral annexation of Palestinian land, known as the "convergence plan." Before they count on the support of Ahmed Tibi, Azmi Bishara and Talab al-Sana, it would be worthwhile for them to look into the election results in "the sector."

Dr. Dan Gara, an expert on Israeli Arabs, has found that in the Arab villages (not mixed) in which most Israeli Arabs live, only 22.3 percent voted for Jewish parties. However, due to the low overall voter turnout in these elections, the Arab parties also did not win more than half the votes of eligible Arab voters. These statistics are a clear expression of the lack of confidence that Israeli Arabs feel in the good will of the Jewish politicians, and of the loss of confidence in the power of Arab politicians. What luck that there's someone to condemn. Now we can continue discriminating.
Posted by Christopher Brown at 8:48 PM