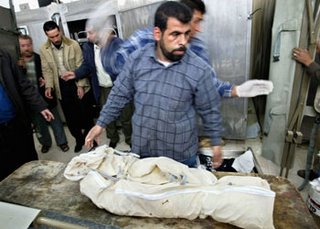 The collapse of the Palestinian health system due to the freeze of the tax revenue
by Israel, and the stoppage of international aid is the focus of a new position
paper published by Physicians for Human Rights-Israel. Some of the cancer patients
in the Gaza Strip have not received chemotherapy for over a month. Ending the
funding to the health system will lead to the death of thousands of people in the
short term and to extensive morbidity in the long term.

At least four patients have died as a direct result of this lack of funding.

Financial assistance given to the Palestinian Authority amounts to approximately
$1-billion yearly, and a large portion of budget for the Ministry of Health is
provided by overseas donors - so that the acute humanitarian needs of the population
can be met. In the short term, Israel is responsible for the outcome of the collapse
of Palestinian civil society in general and the health system in particular.

The Palestinian Ministry of Health:

§ Provides 64.5 percent of the general health needs of the Palestinian
population.

§ It employs approximately 11,000 individuals, comprising 57% of the
workforce in the Palestinian health system. None of these individuals have received
their salary for three consecutive months.

§ Some $7.6 million are spent on expenses other than salaries. Approximately
83 percent of this amount is expended on the acquisition of medicine, vaccinations,
urgent treatment, supplies, and the operation of laboratories.

§ Finances the referrals for patients in need of care not available in the
occupied territories: During 2005, in the West Bank, 19,737 patients were refered
for treatment out side of the Palestinian government health system to hospitals in
Israel, Jordan and Egypt. The cost of these referrals was $ 39 million. In the event
of a total collapse of the Palestinian health ministry, these patients will not
receive treatment, because there will be no infrastructure for facilitating the
referrals and coordinating payments.

Who will pay for radiation treatments for these patients if the Authority collapses?

Physicians for Human Rights-Israel is aware that Shifa Hospital, the central
hospital in Gaza, has not received (for at least a month) the essential medicines it
needs for basic care, such as Lasix (a diuretic medicine that reduces fluid pressure
on the lungs) and Erythromycin (a widely used antibiotic).

In Shifa Hospital four patients already have died as a result of the reduction in
the number of their dialysis treatments from three per week to only two.

1. To cease the policy of closure and curfew that is dismantling the different
Palestinian civil services - particularly the health service.

2. To forward tax revenue due to the Palestinian Authority promptly and without
delay.

3. To facilitate the work of international bodies and encourage them to
continue to support and finance Palestinian civil infrastructures and systems.

4. To provide free medical services for the residents of the Occupied
Territories in fields that are not available in the Palestinian system. If the
system collapses, Israel must meet all the civil needs.

After I finished my service in the special forces - we have finally left Lebanon, and good riddance! - I was transferred to the Jericho Joint Patrol. Not sure whether you have heard of it, but it was a fairly common practice back in the days of the hudna; IDF and PA police patrolling PA-controlled turf together. In Jericho, it mostly included driving around in Jeeps a bit and then having coffee and houmus under an old tree for a few hours.

Well, Jericho of these days was a splendid place. The casino was bringing in the big bucks, the city had more restaurants and gift shops than population, agriculture was booming, the streets were clean... Really a good place to live in, save for the godsdamn heat. Oh, sure, we had our share of unpleasantness - petty crime, the Jericho psycho that got the kicks out of raping young boys (we got him in the end), the daily heart attacks among the tourists in the casino... but it was nothing major. The biggest thing we had there during that period was the time when the Islamic Jihad, IIRC, threw a Molotov cocktail into a passing car and burned alive an Israeli woman and her 2-year-old girl. But, as I said, it was the exception rather than the rule.

But there was this feeling in the air... a feeling of foreboding, you know? Eveybody knew it was a hudna and not a real peace. Khaled, the big chief of our Palestinian counterparts, smiled secretively when he remembered his good old days in the first Intifada (he was crazier than a loon, but that is normal for a paramilitary commander). The Force 17 fucks gave us all dirty, knowing looks... but most of all, there was the feeling in the air. Like a gathering storm you cannot see.

And boy, did it break. Old Yasser - the Rayiss - pushed the button that started the new intifada. And within the span of a single day, everything changed. The guys we had coffee with on a daily basis suddenly started shooting at us. Khaled stopped being nice and let his inner beast surface. The casino was occupied by gunmen that constantly fired on us. The old tree under which we drank coffee was blown up. Shops were looted by militias. Restaurants closed. Hothouses were shattered. The streets filled with gunfire and rubble.

Our base was burned down and riddled with bullets - where once we had only plaster walls, now stands reinforced concrete. The casino was shelled to get rid of the snipers. The local population descended back into violence and poverty.

And this, my friends, is the sad tale of what briefly was the most successful town in PA. It might have many morals, or it might have none at all. Me - well, I take it simply: there is no point in buiding that which be destroyed by stupidity and bloodlust. There is no point in paying the Hamas when they could have easily resurrected the prosperity of Jericho... had they only wanted.

I mourn for Jericho. Sorry for rambling.

Let me know when Physicians for Human Rights-Palestine calls upon Palestinian's to disarm, renounce the right of return, and go to the peace table.