Searching for the next American Idol...I mean, journalist 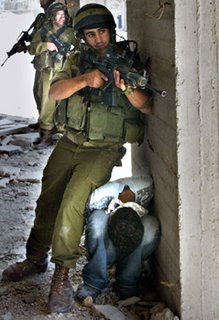 Sadly, they have not been debunked.

So on Wednesday morning I turned on my television to see if Good Morning America’s (GMA) morning show might present some coverage on the bill, still nothing.

The only coverage given to H.R. 4681 or the Palestine/Israel conflict, was the first official visit by Prime Minister Ehud Olmert to Washington D.C.

In fact, the finals of the hit television show “American Idol” received more coverage than Olmert’s segment. I sat watching the three hosts debating the merits of one singer over the other. Not surprising, but I digress.

As is the case with Sharon before him, Bush praised Olmert for handling himself with dignity and grace.

With the way Bush hands out compliments to this man, you’d think that Olmert was standing before Paula Abdul, one of the judges for American Idol, receiving kudos for a strong singing performance.

But even after the snippet on Olmert and, of course, debating the next singing sensation, I still held out hope that H.R. 4681 might get even a ten second window of a mention. I mean after all, these are serious journalists here!

Robin and Diane assured the audience that Charles would bring the same integrity and journalistic professionalism to his new post as he had with GMA.

Congratulations Charles, or as we say in Arabic, Mabruuk.

I’m sure you’ll have much to talk about when you report that Bush has basically given, albeit muted, backing for Olmert’s plan to draw Israel’s final borders without including the Palestinians, and all the hell that it’s gong to cause. But you know that’s for another time.

Oh Chuck, by the way, you will let me know who the next American Idol is won’t you? I mean, as we all know that’s the real news we all need to know about right?
Posted by Christopher Brown at 1:55 PM

hmph..sadly thats what most people care about..funny, some people havent even heard of aything going on in the middle east or any where else in the world! And yea it is hard to find REAL news, even online..some things are just never spoken of..oh wellness its up to us "concerned" people to dig the stuff up i guess :s

Some people believe the world is flat, but we are not concerned with those people.

The Internet is flooded with real news. It just isn't the news from your point of view. Nor should it be.