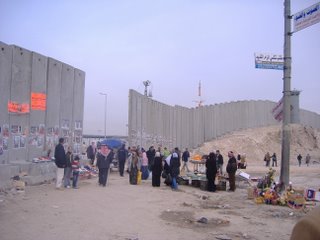 In addition to the EU, the US is also suspending aid to the Hamas led government, citing Hamas non complience for not recognizing Israel's right to exist.

At the present time, the Bush Administration has no official or unofficial communication with the PA, and has no plans to do so in the future.

The Hamas led government lashed out saying that such a move is essentially "collective punishment" of the Palestinian people.

It has been noted by the United Nations Releif Workers Agency (UNRWA), that the PA is facing a severe crisis in Gaza due to the karni crossing constantly being closed to any humanitarian aid.

Presently, Israeli unemployemnt is 8.9%, while the Palestinian unemployment rate is estimated at 25-31%.
Posted by Christopher Brown at 1:24 PM