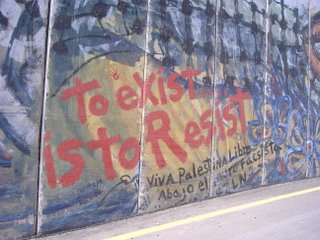 My journey is nearly over. Its been over a year and-a-half since I last was in Palestine. A lot has changed since I touched down here and called this place my home. Checkpoints are being replaced with "Terminals." Ariel Sharon, who ran rough-shod over the Palestinians and their land, lies in a coma in a hospital in Jerusalem, replaced by Ehud Olmert. Who, not to be outdone, is trying to shore up permanent borders unilaterally for Israel and a "Supposed" Palestinian state by 2010. Yes many things have changed.

But still familiar things remain. For instance, the blind support of 48 million Evangelical Christians to the State of Israel.More illegal settlements popping up on Palestinian lands.And the obvious anti-Semitic rhetoric that is unleashed whenever anyone speaks out about the Israeli government.

This trip has been a wondrous ride at seeing old friends, making new acquaintances, and bidding farewell to others.

But inspite of all that has gone on since I have arrived back here. In spite of the fact that many days I sat in shock, wondering what will become of all this. I am still filled with hope for the future. How much at the moment, I can't really say, but I have it.

Its time now for me to go back to the confines of the United States. Back to a country that is where I am based but have not called home for quite some time.

I'm not sure where life will take me next. Perhaps there is some way that I can work here in Palestine, as I had always hoped. Buy a house in Bethlehem's Old City, and be able to stand with some many people who have graciously welcomed me into their homes and lives.

I'd love for this to happen. But, at the moment, its all out of my hands. However, know that I will never give up, give in, or move on from the commitment that I have for this place and the people of it.

I recall once when I was still in Christian Peacemaker Teams (CPT) in Hebron. I appeared from our apartment in The Old City and one of the shopowner's that had known me for quite some time asked me where I was going:

"I am traveling to America." I replied.

"Are you leaving for good?" He inquired.

"Good," he said with a bright partially toothless smile, "Because your home is here not in America."

To this day, that is still the nicest thing anyone in this country has ever said too me.
Posted by Christopher Brown at 7:27 AM