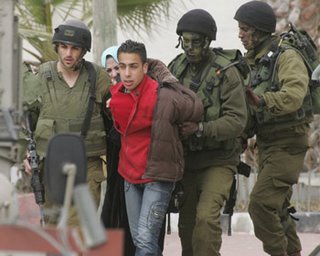 I hear more and more in the corporate media the word “objective” being tossed about. The talking heads that one sees on the major networks of ABC, CNN, CBS, NBC, MSNBC and FOX all purports to objective coverage on today’s news.

But the more we hear this, the more it seems that it isn’t so. I hate to break it to you people, but there is no such thing as objective journalism. Not on major issues that are being covered (i.e. Iraq, Palestine, Iran, Domestic spying etc).

For instance, over the last several weeks, there have been a slew of tank shells that have fallen into civilian populated areas in Gaza; yet, outside of the alternative press and independent journalists, there has been no coverage. But, in the same time frame, when a suicide bomber blew himself up in Tel Aviv, the corporate news junkies stumbled over themselves trying to cover the story.

Please understand, I am not saying that the death of those in Israel is no less important than those in Palestine. Death is death. Murder is murder. But I find it odd that the only time when a Palestinian’s name is mentioned, outside of a government official, it is that of a suicide bomber. Rarely have the names of Palestinian victims of Israeli violence been mentioned in the mainstream media.

I have yet to hear the corporate media show photos of Palestinians who have died as a result of the occupation. Too often, the international press receives their information on the events of Gaza and The West Bank from the Israeli Occupation Army. Often the reason that they tend to do this is because they are told that going into The West Bank and Gaza is too dangerous.

The very profession that we work in demands that we take the risks to get a story out no matter what the cost. Journalist risks there lives constantly, and at times pay with their lives, in order that the World might be able to see the side of a story that has not been heard. Some of the most solid footage the West received on siege in Fallujah was due to two brave journalists working for the Aljazeera Network. The same Aljazeera network that Bush supposedly wanted to bomb a while ago.

A friend of mine, Mazan Dana, was shot in Iraq by American troops covering the war. James Miller, who did freelance work for the BBC, was murdered in Gaza by Israeli soldiers while making a documentary about the catastrophic situation in Rafah Refugee camp.

To be objective (And I am speaking of major news stories i.e. Israel/Palestine, Iraq, Iran etc) is to simply agree with the power structure. To be objective means to toe the company line. To be objective means to give in to the pressure of not pursuing the truth. The very reason that one pursues a story shows that they are not objective; and this isn’t a bad thing it’s good! The job of a journalist is to uncover the hidden stories that are not being reported. We must show the “Other side” of the news. The side that the mainstream press refuses to cover. And if we choose to do this, we can no longer remain objective. If we choose this path we are in essence saying:

“There has to be more to this story than what they are saying. There must be another side to reveal.”

And when we choose to reveal that side, we can no longer call ourselves objective. But what we can be is fair.

One can continue to show the disparity between rich and poor, oppressed and oppressor, haves and have-nots without whoring out one’s journalistic integrity. The question is; will we do it and risk our cushy jobs and status in the eyes of the general public and our smug peers?

Do you have the courage to do this?

For more on the disparity of news coverage in Palestine and elsewhere, click on the links below