The play's the thing. 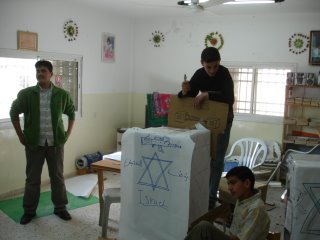 You could hear the low rumbling from all the young boys in the room as they sat in a "U" shape before me around three long folding tables.

Finally, one of the boy's, Hammad, raised his hand.

"You mean we're going to do all of this in 45 minutes?" He inquired.

What "this" happened to be involved writing, directing, and performing a play in under an hour.

A friend of mine asked me to participate in National Reading Week here in Palestine. When she first presented the idea, I looked on a bit unsure of what I could bring these kids.

The kids I am refering to are from Al Fawwar refugee camp that resides close to the town of Dura, near Hebron. The camp is run by United Nations Relief Workers Agency (UNRWA). Unemployment runs high here, more than 60% of all famalies live below the poverty line, and the camp is under constant harassment from the Israeli army. Children don't really have an outlet, but my friend thought that teaching them about art might be of some use.

After awhile, she talked me into doing a workshop on play-wrighting.

As I stood before the 18 boys who had ventured into the Palestinian Cultural Center, I told them of how I first came to love the theatre. At eight years old, my sister took me to see my first play. We lived in a township called Ginsburg near East London in the Eastern Cape Province of South Africa. Because of apartheid, we could not go to White locations to see such things so a man in our township performed for us in the center of our camp.

The stage consisted of three beat-up, fold away tables and several parafin lamps to serve as the stage lighting. On the stage sat a chair and nothing else. When the actor appeared, he sat on the chair and told of his youth growing up in the township from infancy to adulthood. All he used to describe those he encountered along his journey were the minimal in props; a rubber mustache, wig, and various hats.

I sat spell-bound at how he made me feel. I thought the people he spoke of and transformed into, were right next too me.

After the show, I dragged my sister with me in order that I could meet him. Shyly, I inquired how he managed to do something so mystifying. He bent down and pointed to his brain.

As I related this story to the children, I informed them that they would be making a play from their own imagination and perform it for myself and the other adults who were present.

After explaining, the basics of story structure and the beauty of minimal theatre, I split the boys into two groups. They eagerly went at their task with a ferver that really impressed me. 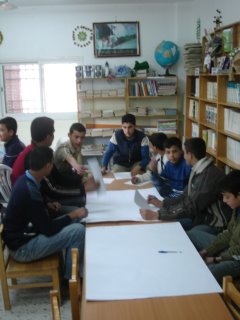 After 45 minutes, they were ready to present their art. I must admit, that I tend to be skeptical on how these sorts of works might come out, in that there is so little time, but I found myslef impressed with the results.

I emphasized drawing from their own experiences in the camp to create their works, using only boxes, of various sizes (that were supplied for their use), paper, and color pens.

The results from both groups of children spoke of life under ocupation. In particular, dealing with soldiers at checkpoints and the humilation that this induces. I sat, once agian, mesmerized by how they made me visualize the checkpoint and the callous nature of the soldiers. 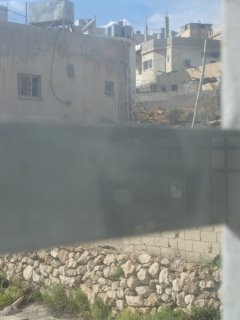 Shakespere would have been proud.

After the performances, Hammad, the young man whom had spoken up before asked a pointed question:

"Why do this?" He inquired, "What can be the purpose of it all?"

I looked on and smiled, just like the actor who had smiled at me so many years ago in my township, and said:

Hammad looked on at me and smiled. He raised his hand once more and said to me that he and the other boys were honored to have me with them.

"The honor is all mine." I replied.

"When will you come back?" He asked.

"Hopefully," I said, "In December of this year."

"We look forward to seeing you then." he said.

God willing, I plan on keeping that promise.
Posted by Christopher Brown at 3:29 PM