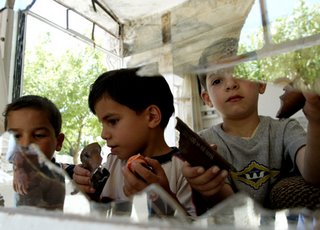 I recall a time when I was ten years old. A friend of mine, John, were wanting to play football with another neighborhood boy, Kenny, but we didn’t have our own ball. Kenny, however, did have a ball and agreed to play with us.

Now, understand, we were all about the same age. We had been friends for a little over two years. I had recently moved to California from South Africa and I still had difficulty understanding English. But I knew the rules of the game because we had all been playing since we could walk.

It started off easy enough; we choose our players for the two sides, had a coin toss to see which goals we would defend; Easy right?

Well that is when the problems started. Now, before I go any further, it might be worth mentioning that Kenny is not a very good footballer in fact, he stunk. I mean he flat out couldn’t play. He had no natural athletic ability; he constantly got winded due to his asthma condition, and he seemed very reluctant to mix it up when the rest of us who were flying across the field, sacrificing our bodies the way normal, slightly deranged ten-year-old boys do. At one point, someone decided that we were playing in The World Cup The USA VS South Africa (This happened by default because I was the only kid who had lived outside the country).

During the second half, Kenny managed to steal the ball away from one of our players. He had an open field and only one kid to beat, the goalkeeper that would be me. Kenny charged hard, I tried to take an angle so I could have the goal defended as best I could. Kenny, neared, sweat dripping down his chubby cheeks, wheezing all the way; I heard John cry out, stop him Topher (my nickname; short for Christopher)! I decided not to wait; I bolted towards Kenny and slid just as he began to strike. I cleanly hit the ball and took out Kenny’s legs in the process. The ball careened off the wooden fence that served as one of the boundaries and rolled to a bush where it stayed.

My teammates all came over and cheered. There was quite a bit of backslapping and hand shaking going on. Congratulations were showered upon me.

“Man, you ought to turn pro after a save like that!”

As I soaked in this adulation, I heard a loud shout from just behind me.

“What?!” I replied incredulously.

“Foul. You totally fouled me!”

It was Kenny. He walked over and picked up the football and placed it just outside the goalie box.

“Are you serious?” John asked, looking on in total disbelief.

“Of curse I am! Topher, you totally fouled me and you know it!”

“No I didn’t Kenny. Knock it off and suck it up! That was a clean save.”

Kenny looked around hoping that his own teammates would chime in and help him out. Hoping that someone would step in to rescue him from this awkward position.

Finally, Kenny picked up his football and began heading to his house. The rest of us looked on at him, saying nothing. What just happened here, we thought to ourselves. Then John called out to him:

“Where you going Kenny?”

“But we’re playing, it’s the second half.”

But it was too late. Kenny kept walking, turned the corner and disappeared.

There’d be no World Champions on this day.

We all stood around for a moment looking at each other. Then, slowly, we all began to head home, convinced that our side would have taken the Championship, but never fully knowing now.

A few days later, Kenny and his family moved away. None of us ever found out where. We never did finish that game due to the fact that none of us had a ball to play with.

I relate this story to you today for a reason. Thabo Mbeki, the President of South Africa is planning a trip to Ramallah to reciprocate the recent visit to South Africa of the president of The Palestinian Authority, Mahmoud Abbas – and to talk to Hamas.

But as anyone knows, meeting with Hamas will anger Israel and rule out any chance of Mbeki playing a mediating role in the conflict between Israel and Palestine, a role that he has deeply coveted.

Mbeki has an “open invitation” to visit Israel and wants to take up the offer. But Israel has made it very clear that it is toughening its attitude towards Hamas and is trying to do as much as it can to isolate the organization, which is dedicated to the destruction of the Jewish State. In fact, last week, Israel announced that it would not talk to anyone who talks with Hamas.

For all the years I spent living in Palestine and just recently coming back, I have noticed the same thing. Israel wanted Hamas to cease with suicide bombings, they did, but Israel continued targeted killings on Palestinians fighters and civilians alike.

Both the US and Israel wanted the Palestinians to hold free and fair, democratic elections, and when Hamas won by a large majority, both countries cried “Foul!” and said that they would not bother talking to them. Both the US and Israel have cut off all aid to the PA, and essentially placed the entire Palestinian people on collective punishment for actually showing both countries how democracy works in the electoral process.

Hmmm…I don’t know about you but it seems that I’ve figured out where Kenny may have ended up after all these years.
Posted by Christopher Brown at 2:05 PM