They have to wait? 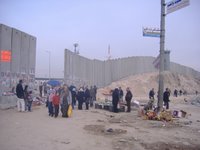 Often, in my discussions with people I talk to in The United States and Europe, I hear the same refrain: “Well, I know it’s bad right now in Palestine but the people just have to be patient and wait. Things will get better.”

Well, waiting is fine for a letter to come from an aunt or uncle on your birthday. Waiting is okay to run down on Christmas day to open up your presents.

And there is no problem waiting in line at the bank to cash your paycheck.

But when you have seen Israeli soldiers and settlers shoot, bomb, and stab your parents at will; when you have seen hate-filled border police curse, kick, brutalize and even kill your siblings with impunity, when you see the vast numbers of your Palestinian brothers and sisters cut off from one another by a supposed “Security wall” that is nothing more than a large outdoor prison; when you suddenly find yourself at a loss for words because your five year old boy wants to know why he cannot visit Jerusalem, even though he was born there but his parents hold West Bank IDs, and you see tears welling in his eyes when you explain that most of the land is closed off to him simply because he is Palestinian, and see the clouds of inferiority that begin to form in his once creative mind, and see him distort his personality by unconsciously developing a bitterness towards Israelis; when you have to create a lie when your beautiful seven year old daughter asks: “Abu (Father) why do Israelis and the world treat Palestinians so mean?”; when it takes you two hours instead of the normal 20 minutes to get from one village to the next because you are not allowed to drive on “Israeli only” roads; when you are humiliated day in and day out by 20 year old soldiers at checkpoints who really don’t give a damn about whether you have a permit to go to a hospital in Israel or not; when your first name becomes “terrorist” and your family name becomes “Arab”; and your grandparents are not afforded the respect they are due; when you are harried by day and haunted by night by the fact that you are a Palestinian, living, always, on the edge, never quite knowing what to expect next, and plagued always with inner fears and outer resentments; when you are forever fighting a degenerating sense of “invisibility”, and you wake up everyday saying to yourself; “Today can’t be worse than yesterday.” But somehow it always is; then you will begin to understand why the Palestinians cannot wait.


NOTE: The Inspiration for this post came from Martin Luther King’s “LETTER FROM A BIRMINGHAM JAIL”
Posted by Christopher Brown at 11:45 AM