Seems so simple when it's on television. 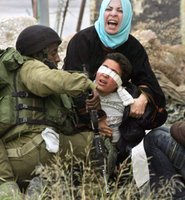 Yesterday, April 17th in Palestine was Prisoners Day. A solemn reminder of just how bad the situation in Palestine has become.

On Sunday I happened to turn on the television and came across the news program “60 MINUTES” Usually, I don’t watch the mainstream media but the first story grabbed my attention and I felt I had to watch.

The story dealt with Palestinian Prisoners in Israeli prisons. I sat and watched as Bob Simon interviewed Abdullah Bargouhti, a man whom Israel claims is behind the most deadliest suicide bombings that resulted in the deaths of 66 people.

I found an exchange between Simon and Bargouhti to be quite interesting:


The most notorious of all the prisoners held at the Be'er Sheva Prison is Abdullah Barghouti. It's not easy to get to see him because he’s being held in indefinite solitary confinement. He's been convicted of being the mastermind behind Hamas’ deadliest suicide bombings, responsible for the deaths of 66 people, including five Americans. How does he feel about this death toll?

"I feel bad because the number only 66. This the answer you want to hear it?" Barghouti told Simon.

"I want to hear what you have to say," Simon replied.

"No, this is the answer they want to hear it? Yes, I feel bad, because I want more," Barghouti said.

I found this exchange interesting because, to me, people in the West want people like Bargouhti to have these feelings; that they are glad that they killed 66, 100, or 3,000 people; and they are now dancing in the streets for joy.

But what many of us continue to forget is to ask ourselves the question of why someone would do what he or she has done.

What drives a person to become a suicide bomber?

What compels someone to walk into a crowded market and destroy their life and the lives of others?

The answers are never easy, nor simple. But, as a person who lived in Palestine for three years; and witnessed children being threatened by soldiers, settlers, and police; whose parents, siblings, and extended families endure constant harassment, threat of arrest constantly, home demolitions, and of course extra judicial killings, one can see that there is a strong motivation to seek revenge.

I do wish that Simon had delved deeper into the causes that make these young men, an on occasion women, commit these horrible acts. It would have given people who know nothing about this conflict a better idea of what is going on.

But this seems to be the perpetual problem. Yesterday there was a suicide bombing in Tel Aviv that received a mountain of coverage in the mainstream press as well as the alternative media. But yet, last week, when the Israeli Army was firing 300 shells a day into populated areas and saying that they would continue the practice, most of the mainstream press barely covered the issue.

Many Palestinians I know keep asking the same question: “No one knows of our story. No one knows about our suffering.”

From the way the media portrays things nowadays, they’re right.

Photo by: Nayef Hashlamoun
Posted by Christopher Brown at 12:07 PM