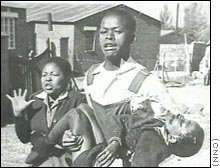 On this day 27 April, 12 years ago, South Africa held it’s first democratic all race elections. I recall this day very well because I was there. I had the distinct privilege of monitoring the election process as an African National Congress representative.

As I stood watching the lines of people, almost all whom were voting for the first time, that seemed to stretch for miles, I inhaled deep and whispered underneath my breath:

What “we” did was nothing short of remarkable. I grew up in South Africa, the land of apartheid, under the heavy veil of oppression. I saw my brother killed before my eyes when I was five years old. I remember the security police constantly raiding our house looking for my father, and anti-apartheid activist who were hiding “underground” to continue his struggle against apartheid. Recalling the times when my mother, sister, brother and I nearly starved because of the lack of nutrition we received due to food being scarce.

I remember my mother telling me of the times when she and my father marched with Nelson Mandela, Chief Albert Lithuli, Govan Mbeki (Thabo’s father), O.R. Tambo, Robert Sobukwe, and many others, demanding our rights as equals.

Often in these marches, the police would respond with force. She told me of the deaths of those who marched in some of the more famous marches in the country’s history where the police unleashed their full arsenal against peaceful protesters. Ask anyone who grew up in South Africa and mention the name Sharpeville; Trust me when I say it always conjures up dark memories of a bygone time in the country's history.

On 21 March, 1960 at least 180 black South Africans were injured (there are claims of as many as 300) and 69 killed when South African police opened fire on approximately 300 demonstrators, who were protesting against the pass laws, at the township of Sharpeville, near Vereeniging in the Transvaal province.

From what I can gather, both of my parents were at this march. My mother was uninjured, but my father suffered his first gunshot wound at the hands of the South African police; He would receive five more before he fled the country in 1972.

Although I had never had to deal with this sort of tragedy, I cannot forget the look in my mothers eyes as she told me of the hardships she and my father had to endure in a land that blacks had inhabited long before the whites showed up.

“One day” she said, “We will be free. I don’t know how many more have to suffer jail, beatings, demolition of they’re homes, or even death, but one day we will be free.”

Now, after more than centuries of oppression at the hands of the Boer (White Farmer), we were free.

As I stood along a stretch of road while monitoring the voting process, an old man, accompanied by his grandson, slowly approach and looked on at me. I smiled at him, but he kept his gaze fixed. I began to feel uneasy wondering if I had done something to anger him. Finally, he spoke:

“I know you" he said, "Your Mthuthuzeli Biko’s boy are you not?”

Shocked, I nodded my head. The man told me that he had met my father back in 1960 at an ANC meeting. My father had given a speech about the need for blacks to feel proud of their blackness, to embrace it that we were every bit as good as the whites. Later, in the 70s, my cousin Bantu Stephen Biko would evolve this concept into the philosophy of Black Consciousness.

“I never forgot that lesson” the old man replied. “Please tell him thank you on my behalf. He helped free me from the chains of my mind.”

I looked on as the old man walked on, patiently waiting his turn to cast his ballot for the very first time.

Looking on at him I thought to myself; “Isn’t that a helluva thing?”

I think back on that moment for the simple fact that I see far too many similarities between South Africa and Palestine.

Recently, while I was in Bethlehem, a taxi driver dropped me off at the Northern terminal and pointed to the horrendous structure:

Turning too me he asked;

“Do you understand this sort of pain? Do you know what it feels like to have so much sufferring in your life and no one cares?”

I remained silent. I knew the pain he spoke of and I could understand exactlly what he talked about. He and I are brothers, joined forever in our common humanity of sufferring.

I hope, one day, in the not too distant future, that driver will be able to see what I saw in South Africa; and utter the same words I spoke on this glorious day 12 years ago:

“Isn’t that a helluva thing?”

Photo by: Peter Magubane
Posted by Christopher Brown at 1:18 PM

Thanks Chris for this post. It gave me goosebumps. It made me feel good. Are you the same Chris Brown that worked for CPT and got beaten up by settlers with one of your colleagues in Southern Hebron? I saw the video. If you are the same guy (and I have the feeling you are), I also read an article you wrote on EI about a drama workshop you did with a group of boys from Bethlehem. That also gave me goosebumps and warmed my soul. Thanks Chris, keep the spirit.